Check out this recent profile video done on our ancestral village of Machtlos by a German news station! 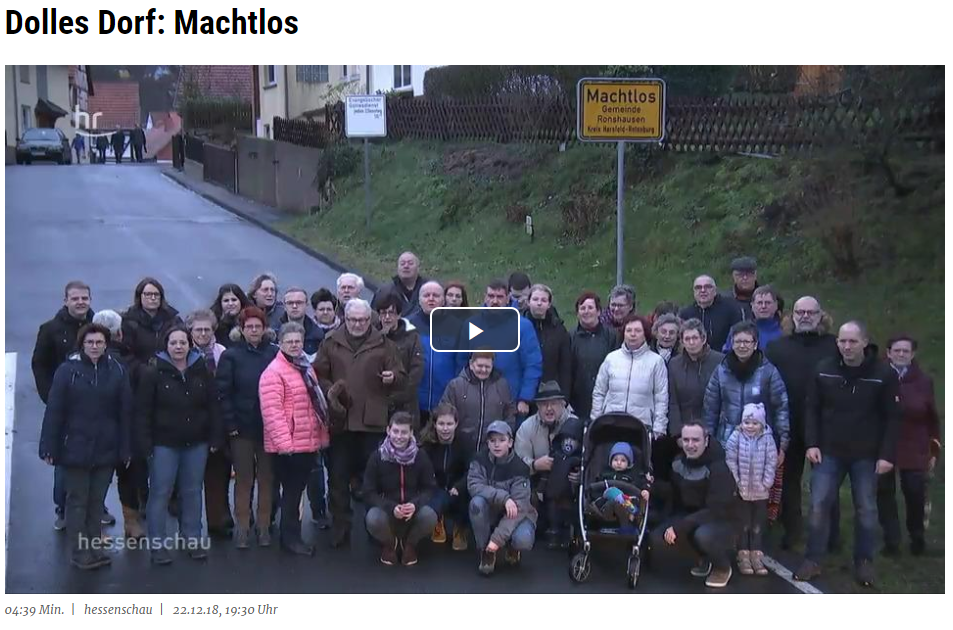 An English translation of the dialogue is as follows:

Udo Berle (Mayor): Let me go! (in German, “Macht mich los!” – a play on the word Machtlos)
Narrator: Will someone save him? Meanwhile, Friedhelm Vogt crochets in his flea market barn. In 2001, the pensioner bought the old farmhouse, including the inventory. He now gradually sells the inventory to the townsfolk, but also to vacationers. He himself once came to vacation in Machtlos and fell in love with the place with the funny name.
Friedhelm Vogt (flea market owner): Because you can just unwind here. Here is peace and pure nature. You can not find that anywhere else like you can in the village of Machtlos. That’s why I feel so comfortable here. Even the townspeople are great. I feel at home.
Narrator: Machtlos lies at the end of a narrow valley in a dead end. It is indeed idyllic here: only the village and the surrounding forest. A paradise for humans and animals! The pony Juliette is just 68 cm tall, the same size as the dog Gismo. The two are a well-rehearsed team.
Jenny Thomas (villager): He taught himself that. He’s been able to do that from the beginning.
Reporter: How come?
Jenny Thomas (villager): He’s learned by pulling the kids on the sled and stuff like that. He likes to do that.
Reporter: And the pony is powerless (in German, “machtlos,” – another pun), so to speak?
Jenny Thomas (villager): Haha! He’s powerless if he has a rope in his mouth at least. Yes.
Narrator: The path is guarded by the pony and dog, and so no one comes across the mayor at the edge of the forest.
Udo Berle (Mayor): Hey, you farmers! Get me out of here!
Narrator: No one hears that, because all the men are getting out of the crummy weather by having fun in the village pub. Owner Karl-Heinz Möller runs the tavern in the fourth generation. 100 liters of beer will slide across this counter this week. A glass never stays empty for long.
Man ringing bell: Give us a round, here!
Karl-Heinz Möller (barkeep): They were always banging their beer glasses on the table. We wanted to abolish that and so we bought the bell.
Narrator: Because so many glasses got broken, now everyone has their own glass here and they have to take care of themselves.
Narrator: It’s not that you have to zigzag home from the pub in Machtlos, Johannes here just wants to check his email.
Johannes Gawlitta (villager): There is no normal internet reception here. But many houses have Wi-Fi. Since I got the passwords from everyone, I just have to find someone who has their internet modem up and running.
Reporter: That’s pretty exhausting, is not it? But it works.
Johannes Gawlitta (villager): I’m used to it.
Narrator: Such neighborly help in this village! Machtlos belongs to the municipality of Ronshausen and is located in the district of Hersfeld-Rotenburg. Machtlos was first mentioned in historical documents in 1329. The Machtlosers are particularly proud of the vacation-home part of their town, which has 170 houses. Well well, what’s going on here? The Easter Bunny, just before Christmas? What’s wrong with the world!
Boy: But Easter Bunny, it’s going to be Christmas in 3 days!
Klaus Killmer (Easter Bunny): What, Christmas? Am I too early this year? I’m not too early!
Boy: Yes!
Klaus Killmer (Easter Bunny): Seriously? Oh!
Narrator: Klaus Killmer has been playing the Easter Bunny here for 35 years. He did not let his mistake today get him down.
Reporter: We were powerless! (“machtlos,” another pun on the name of the town) You really wanted to play the Easter Bunny, why?
Klaus Killmer (Easter Bunny): Yes. Among the townsfolk and with vacationers, I am known as Easter Bunny. I thought it up at that time to inspire people who are vacationing here to come back to Machtlos again. I’m proud to say that many of the children that knew me as the Easter Bunny 35 years ago now today stand in front of me as parents and ask: “Is the Easter Bunny still here?”
Narrator: But we still find Christmas spirit in the village. The nativity figures here are painted by the children of Machtlos themselves. And now, let’s rescue the mayor!
Udo Berle (Mayor): Machtlos!
Udo Berle (Mayor): This explains the name of the place: Machtlos. Centuries ago, a noble traveler moved here. He was attacked by highwaymen and tied to a tree like me now. He was freed from peasants who moved through the forest. In gratitude for the liberation, they were promised to clear the forest and found a village here.
Narrator: So, you tell a centuries’-old legend about this place. One can say: There is a lot going on here!
Villagers: Machtlos! A great village! Yay!

We use cookies on our website to give you the most relevant experience by remembering your preferences and repeat visits. By clicking “Accept All”, you consent to the use of ALL the cookies. However, you may visit "Cookie Settings" to provide a controlled consent.
Cookie SettingsAccept All
Manage consent

This website uses cookies to improve your experience while you navigate through the website. Out of these, the cookies that are categorized as necessary are stored on your browser as they are essential for the working of basic functionalities of the website. We also use third-party cookies that help us analyze and understand how you use this website. These cookies will be stored in your browser only with your consent. You also have the option to opt-out of these cookies. But opting out of some of these cookies may affect your browsing experience.
Necessary Always Enabled

Performance cookies are used to understand and analyze the key performance indexes of the website which helps in delivering a better user experience for the visitors.

Analytical cookies are used to understand how visitors interact with the website. These cookies help provide information on metrics the number of visitors, bounce rate, traffic source, etc.

Advertisement cookies are used to provide visitors with relevant ads and marketing campaigns. These cookies track visitors across websites and collect information to provide customized ads.

Other uncategorized cookies are those that are being analyzed and have not been classified into a category as yet.